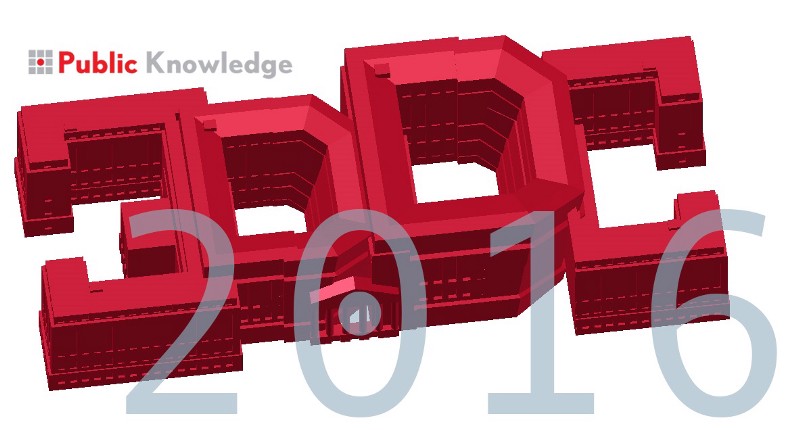 Courtney Duffy (@cduffy90), our Robert W. Deutsch Arts & Technology Fellow, spearheaded the 5th annual 3D/DC 2016 (#3DDC2016), the premier 3D printing policy event in the nation. The event took place on Capitol Hill over the course of April 13 and 14. Here is a recap.

Fractured Atlas was a proud first-time sponsor of this year’s 3D/DC, an event whose mission is to bring together members of the 3D printing community with federal policymakers to promote policy that will encourage, rather than hinder, innovation in the industry. Since 2016 marks 3D/DC’s fifth birthday, we decided to make it bigger and better than ever, spanning the course of two days: the first day was comprised of advocacy training and Congressional meetings followed by a day of panel programming and an interactive reception.

Advocacy Day went off without a hitch — a dozen members of the 3D printing community convened at the DC office of our friends at Public Knowledge for a morning of networking and advocacy training. We discussed the differences between direct lobbying and grassroots advocacy — given that we are not registered lobbyists, we were engaging in the latter — and the types of situations we might encounter during the afternoon Congressional meetings that we had ahead of us.

Here are a few of the takeaways from the morning workshop:

After a quick photo opportunity, our advocates hit the road and headed for Capitol Hill. We split into three small groups to keep the conversations as personal as possible and met with representatives from the following Congressional offices: Representatives Takano, Mulvaney, Slaughter, Lance, Nadler, Scott, and Ryan, as well as Senator Tillis.

The main event was comprised of a series of panels followed by an interactive reception, all of which took place in the Rayburn House Office Building. We received 750+ RSVPs, and the panels, including STEAM Education, the Environment, Social Impact, Bridging the Workforce Skills Gap, and the Arts, were standing room only for much of the day.

The 3D Printing & the Arts panel included some familiar faces: not only was it moderated by Arts & Technology Policy fellow Courtney Duffy, but it featured Fractured Atlas Executive Director Adam Huttler and Arts Entrepreneurship Awards trophy designer and Fractured Atlas member Kate Blacklock on the panel. It also featured Brooklyn-based designer Francis Bitonti, who designed the now-famous 3D printed gown worn by Dita Von Teese, and Phyllis Klein, who runs a makerspace for artists in DC called Fab Lab. You can find the video in full here:

3D/DC 2016 attendees had the opportunity to hear remarks from Representative Mark Takano, the Congressional Maker Caucus co-chair, during the panel portion of the event. Representative Takano is in many ways the champion of 3D printing on Capitol Hill — his staffers are committed to the cause, and he is the only member of Congress with a 3D printer in his office. He shared with the crowd that the Congressional Maker Caucus has created its own Thingiverse page that features a handful of designs that are available for print.

Following the panels, attendees gathered in the Rayburn House Office Building Cafeteria for an evening reception. Between 15 and 20 groups exhibited their work at interactive booths, allowing them access to Congressional members like Representatives Takano and Ryan, who stopped by, as well as Congressional staffers and members of the general public.

In addition to Fractured Atlas and our friends at Public Knowledge, the event was sponsored by the following groups: the Congressional Maker Caucus, Source3, Shapeways, and the Enable Community Foundation. It simply could not have occurred without their support.

3D/DC 2016 is in the books! Thank you to those who helped promote it. If you have any questions about our work on 3D printing policy, feel free to reach out to Courtney.Duffy@fracturedatlas.org.