Kai Lumumba Barrow is a visual artist based in New Orleans, Louisiana. Her creative space, Studio in the Hood, serves as a collaborative hub for interdisciplinary artists who travel to NOLA from all over the country. Kai works as a socially-engaged artist with her colleagues to create and curate what she describes as "large-scale visual operas." We sat down with her to talk about her work and vision, realities faced by artists in New Orleans, and how Fractured Atlas has helped on her journey as a creative professional.

How would you describe your work?

I'm a painter, sculptor and performance artist. I think of my work as coming out of a school of Black feminism— queer Black feminism specifically— and also in alignment with the Black Arts movement. I try to do this kind of collaborative process where I'm working with other artists to design stories. And also, as an artist, I get to play in that too, so I'm not just telling people what to do. We use a very democratic, small, deep process.

My work is a continuum of work that I've been doing since I was 10 years old, which is thinking about that nexus between art, organizing, and activism. What is the role of art? What is the role of healing? How does that contribute to this larger project of Black liberation? And, as a Black feminist, I'm engaged in that work and am in an alignment with other people who are working in that way. So that gives us some real strong principles that allow us to come together across different geographies, ages, and threads of different politics. We have a shared vision around abolition and a desire for freedom but we might think about it a little bit differently. Some of my friends and collaborators may think of it in terms of socialism. Some may think of it in terms of anarchism.

All of these different kind of threads that are, I think, seated in the Black liberation movement. But where we come together in the late 21st century is really about what it means to be engaged in a process of defining our own destinies of imagining outside of the norms that are oppressive, that allows us to play in this kind of luminal space. So we're not utopic or dystopic. We’re in the in-between spaces in our daily practices and in our daily work. New Orleans is an excellent place to do that. 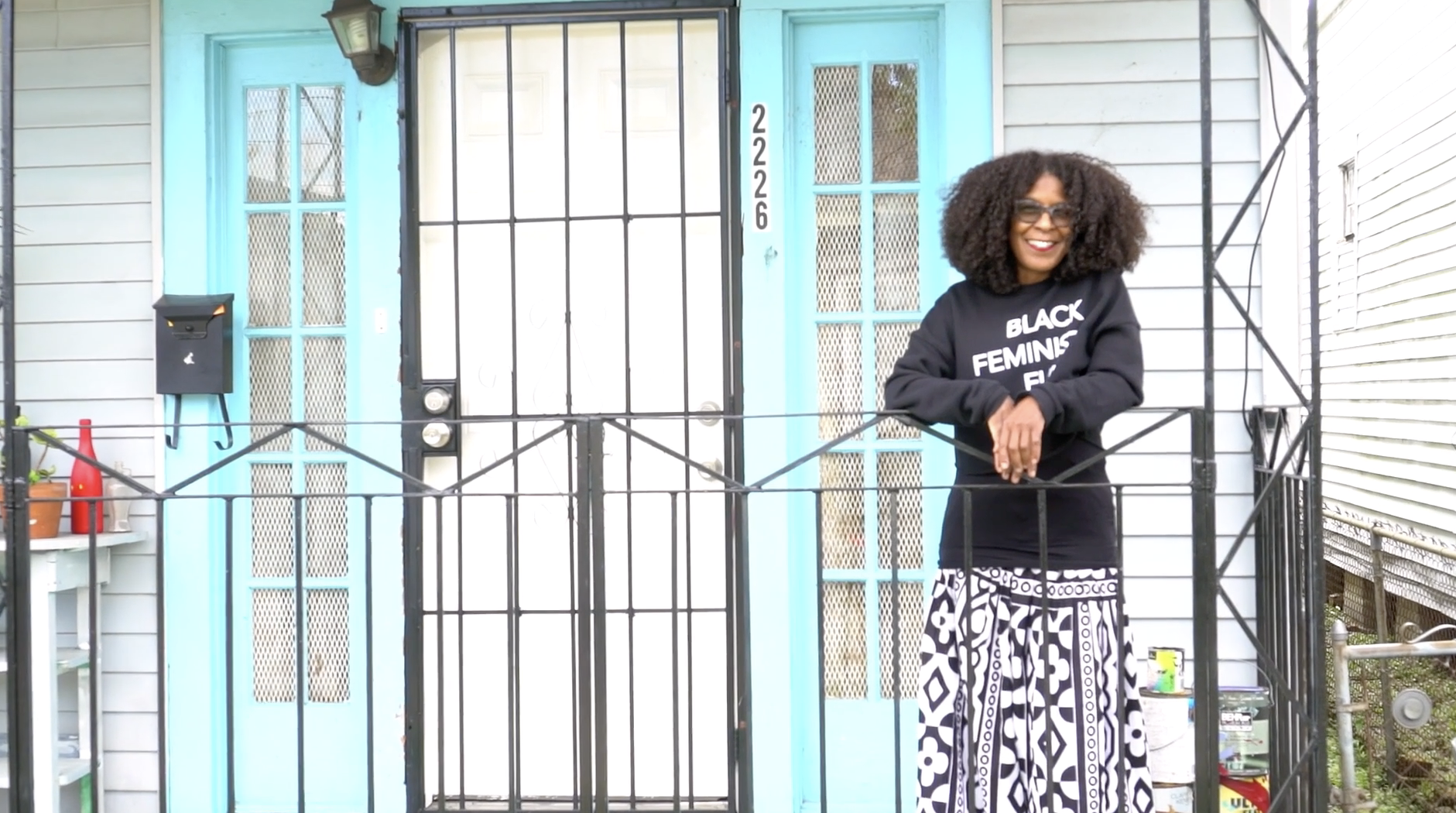 How has living in New Orleans impacted your work?

I think it's the history and culture here. I am currently in a new studio and it's very much in alignment with, I think, the culture of New Orleans. It's across the street from a house I share with others and allows me a space to bring other artists who I work with— activists who are coming through town. Artists can stay at the studio for free. They contribute their ideas and their labor and we are able to benefit from them so it's a mutual aid approach. It's also a space that is generating ideas and eventually will generate a performance. That's our next step.

We're currently working on a project called “Breach: Adventures in Heterotopia,” which I define as "Black Absurd," this visual opera and book which we're really trying to seed beginning in the summer of 2020, going to different cities throughout the United States. It’s a surrealist political circus. And so we're bringing together 20 characters who will be performing a politics of Black absurdity, asking the questions like “What does it mean to choose or elect our keepers?” So we're playing with the circus idea and we're going to come to a town near you.

Can you describe your experiences working with Fractured Atlas?

I started working with Fractured Atlas in 2014. I applied for and received fiscal sponsorship. It was really important at the time because we were launching the first of our visual opera coming to New Orleans. “Echo Hybridity Love Song for New Orleans,” which looked at the 10th anniversary of Hurricane Katrina. So it was really important to be able to receive donations to do our social practice, public performative art works. This was citywide and involved a lot of people similar to what we see now with the Slave Rebellion Reenactment. So many moving parts and people wanted to contribute and there was no way I could have managed those resources on my own, as well as get the grants that I needed without a fiscal sponsor. It was a really easy process. The other thing is when I first was approved to be a fiscally-sponsored project for this project, we also did our first Indiegogo campaign.

We set $15,000 as our budget and we raised that through Fractured Atlas. So it was so cool to have this institutional resource that basically organized donations and kept track of that when I was also producing a large scale, three-day performance with 25 artists and 25 volunteers. Over time I stayed with Fractured Atlas because I honestly like doing the reports at the end of the year and it helps me keep track of what I did. So the organization that I get from my Fractured Atlas membership is kind of tantamount to having a person on staff who's handling that part of the work.

At first I thought Fractured Atlas was speaking to people who are more established in the art field, with more in relationships with larger donors. I always thought maybe I just kind of slipped in. I didn't really think there was a spot for me as this radical artist who's dark about Black liberation who doesn't come out of art school or the New York art scene. I didn't really think there was a place for me. So I'm glad you're doing this. I'm excited about the possibilities. And I think the new website looks amazing.

What are some of the most challenging issues faced by artists in New Orleans?

There's a lack of space in New Orleans for anything. There's no public health care system. Water is a constant issue. We have to boil our water. So that has shifted how I work. The infrastructure is a big challenge, both in terms of lack of space and then just basic conditions. I think another challenge is New Orleans does know I have a developed contemporary art community and it's evolving, which is really exciting. Prospect happens here. NOMA is recently getting more invested in contemporary art. But a lot of artists are having to move out of Orleans parish into St. Bernard parish so that's constructing new displacement.

Check out our video interview with Kai below and learn more about her work at https://www.kailbarrow.com/.