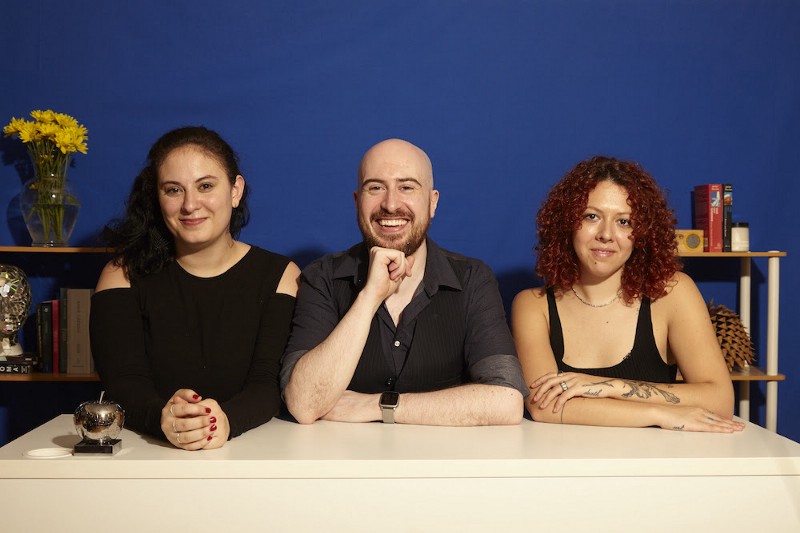 Ask The Experts: An Interview with the Founders of Void Academy

If you haven’t yet heard of Void Academy, we’re excited to make the introduction. Void Academy strives to make an impact in the art world by providing free and affordable resources to help artists sustainably fund their work and make a living. Their first free online course Fundamentals of Crowdfunding offers insights into the history of crowdfunding, how to set yourself up for success before you launch a campaign, and more. It is a valuable guide for any artist looking to use crowdfunding as a tool to fund their work. (And keep reading to learn how Fractured Atlas members can access other Void Academy courses at discounted rates.)

We sat down with founders, Siena Oristaglio, Karina Vahitova, and Noah Blumenson-Cook to talk all things crowdfunding, what motivates their mission, and who influences their work.

How did you decide to start Void Academy? What is your vision for Void Academy’s role in the arts ecosystem?

Siena: The three of us previously worked for the arts nonprofit, Marina Abramovic Institute, where we ran a very large crowdfunding campaign, which was the most funded arts campaign on Kickstarter at that time. After that success we started meeting a lot of artists looking for advice and help with crowdfunding campaigns to support their own work.

I’ve personally worked in arts communications for about ten years, working mostly for arts nonprofits, helping them with their web presence and community-building through online platforms, along with building websites for my artist friends since I was a teenager. I knew that I loved doing this work, and now artists were coming to me to ask for advice for how to sustainably fund their work. Collectively, we felt that we could make the most impact by helping artists figure out how to use online tools to build their communities, make a living, and fund their artwork.

What do you think are the most common misconceptions or other knowledge gaps about crowdfunding or fundraising as an artist in general?

Noah: When we are approached by folks who know what crowdfunding is, the number one misconception is that there are magical people living on the internet who will fund your art that you don’t know, but if you say the right thing or press the right button, they’ll show up to fund your work. That’s the first misconception we have to deconstruct. Because fundraising always starts with the people you know who are familiar with your work, who become your ambassadors who can help spread the word.

Siena: There’s also a knowledge gap in terms of how artists do not usually feel comfortable asking or know how to ask for support. We always say that the first part of each of our workshops is a kind of therapy, helping artists work through their phobias about technology, asking for and talking about money. While these aren’t knowledge gaps exactly, these attitudes cause knowledge gaps because artists would often rather delegate these tasks to other people than empower themselves and learn how to use online tools or how to ask for money. I’m seeing more and more artists coming to us because they recognize that acquiring knowledge and skills in these areas will put them in a position of power even if they have fears and reservations about this side of the work.

Karina: A lot of artists believe in their work, but they don’t believe there are people out there who will want to support that work. That’s incredibly sad to me knowing that’s not true, based on crowdfunding statistics alone as evidence, that there are so many people out there who want and even need to see beautiful, socially-engaged artwork exist in the world. Even before we begin to fill in the knowledge gaps, we must remind artists that their art is worthy and that they can start by believing in the value of their work themselves so they can convey that worth to others. The fear of asking is often rooted in this deeper issue of artists feeling personally unconvinced of the value of their own work.

How do you guide people to that next step of cultivating a network of supporters, getting to a place where they can confidently launch a successful crowdfunding campaign?

Noah: Something we like to do is encourage people to actually practice; to practice asking in spaces with people they know and feel comfortable communicating with. That’s the best way we’ve figured out to break down that preconception that if I’m asking people for help, it’s begging or people won’t be interested.

The shift or “aha” moment we’re looking for is that point when artists understand that they’re asking for support to make work that provides something beautiful to their audience, work that their audience values and would feel motivated to lend support. The public perception is still based in this idea of charity, which I think is a little bit wrong. The more that people are in the practice of asking and seeing case studies of successful models, they realize that rather than begging, asking for support is part of an exchange.

Siena: In workshops, we start off by pairing off participants and we give them actual dollars. We then ask participants to talk about their work and ask the person sitting across from them if they want to give their dollar to support their partner’s work. In our Fundamentals of Crowdfunding course, we start with these other steps like creating an engaging website and building a mailing list, to show that these are necessary steps to build a community. A mailing list gives fans and followers an opportunity to sign up and engage with your work, and start receiving regular updates from you, before the time comes to ask that audience for monetary support.

We encourage folks to practice engaging their communities through their mailing lists, asking recipients to share, post, or comment on their work. This exercise gets you in the habit of asking your audience to engage, even before you start asking for money. Once you’re ready to start fundraising, your community is then already used to responding to calls to action from you and you feel comfortable asking for support because it’s familiar. Over time, this builds trust with your community, and that gives you a foundation from which to run a successful crowdfunding campaign where financial support is involved.

I remember from your online course, that you devote considerable time to the importance of setting up a strong and compelling artist website, which might seem counterintuitive for a course devoted to crowdfunding. Why is this an integral step to take before you plan to launch your campaign?

Noah: The first step we focus on is explaining how internet tools can be used in parallel and in concert with “real-life” interactions, rather than as a totally separate mode of engagement. Anyone you’ve engaged with in-person, you should also engage with through your email mailing list and other tools. For some folks, it feels like these two separate worlds and engagement with two separate audiences, but the internet is just an efficient way of communicating with people ultimately.

Siena: In our Fundamentals of Crowdfunding course, we start with a history of crowdfunding, explaining how Mozart asked 176 people in his community in Vienna to back his concertos financially before they were composed and performed. The technology makes it easier and makes connecting with audiences more immediate, but the model stays the same. The number one way to grow a base of support to sustain a successful crowdfunding campaign is through one-on-one reach-outs to people you know and already engage with. It is so important to have relationships with your community, to engage with them, ask them questions, and learn about the individuals who make up your support base.

Do you have any favorite past crowdfunding campaigns that serve as models for success?

Siena: We actually have a series on our journal, featuring ten great crowdfunding projects every month. We look at ten examples and look at what makes them particularly effective. These are useful examples, but we’re not teaching a formula to create crowdfunding robots. We’re showing artists best practices and strategies they can incorporate into their own practice, using their own style, approach, and voice.

Who influences your work? Who do you follow for new insights and resources for thinking about how to foster a more equitable and sustainable art world?

Karina: W.A.G.E. (Working Artists and the Greater Economy) is one organization primarily focused on institutional reform, working to push museums and other arts nonprofits to shift their budgets to include wages to compensate artists for their work. BFAMFAPhD has also done incredible statistical research looking at arts school graduates and exposing the ways in which art schools don’t currently prepare artists with tools or skills to become financially sustainable.

I’m also mostly inspired by activists who are doing work to promote social justice in all areas. I’m thinking of folks like Linda Sarsour and Reina Gossett who are doing work to organize within and change existing systems. Their work inspires me to bring the critical questions that these activists have raised into our own work contributing to artists’ empowerment through Void Academy’s work.

If there is one resource or book you wish more artists were familiar with, what would it be?

Karina: 9.5 Theses on Art and Class by Ben Davis provides a context for artists to see and realize how they are implicated as individuals in systems which perpetuate larger structural problems which disenfranchise artists and generate and perpetuate inequalities. Sesshu Foster’s essay “How Is the Artist or Writer to Function (Survive & Produce) in the Community, Outside of Institutions?” is also an incredible, lyrical account of what it means to be a creative person realizing that we ultimately rely on communities of people, rather than faceless institutions. Gregory Sholette’s Dark Matter: Art and Politics in the Age of Enterprise Culture is also an important one.

Noah: I would also suggest Information Doesn’t Want to Be Free: Laws for the Internet Age by Cory Doctorow. It’s not the one thing that artists should read, but it is important for helping folks to understand the internet as a digital commons, especially as artists trying to use internet-based tools to make a living, and to begin to become more aware of issues and technologies which affect its accessibility.

What’s the best way to keep in touch with Void Academy and become familiar with your resources?

Arno Mokros is a queer writer, print artist, and administrative professional committed to fostering accessibility and inclusion in arts communities. He is co-founding editor of Little Pharma, an intersectional feminist art and literary zine, a dedicated space for creative explorations of mental illness. Prior to joining the Fractured Atlas team, he gained program administration experience at the Social Science Research Council in Brooklyn, NY. He holds a B.A. from Smith College, and completed coursework at the University of Hamburg in Hamburg, Germany.