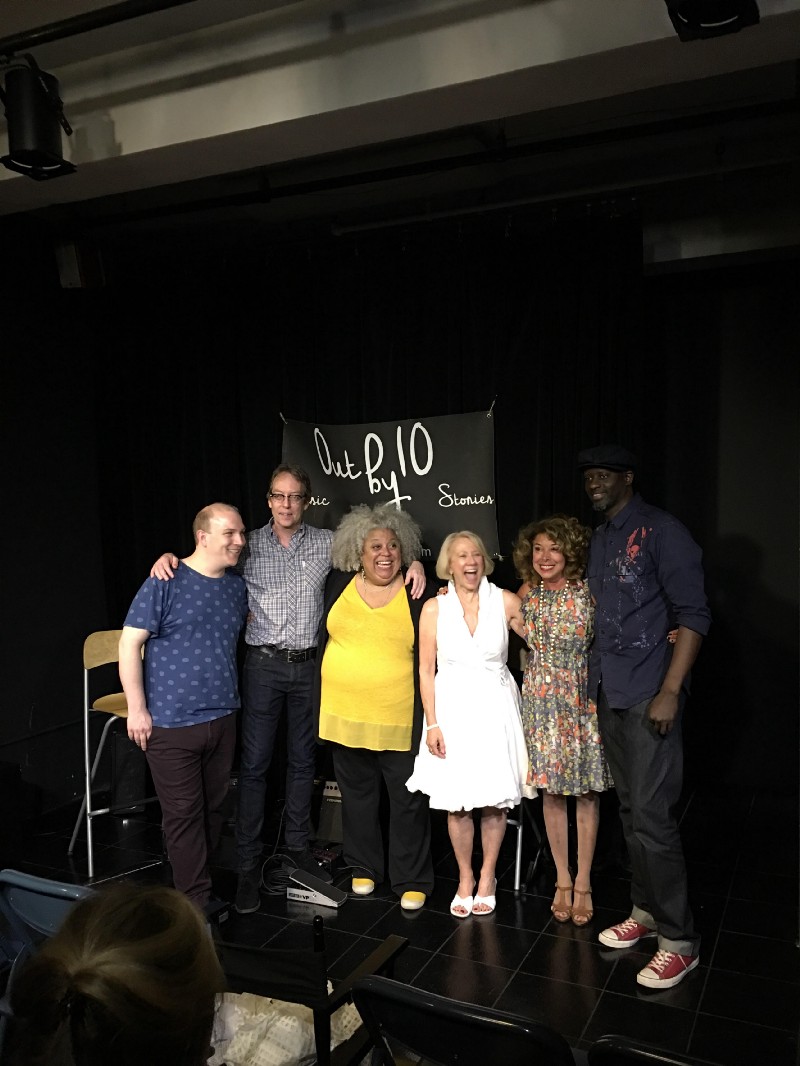 Meet the Project: Out by 10


Each month we feature one of our fiscally sponsored projects who have been successful at using our program to advance their art/cause/career. This month’s featured project is Out by 10.

Out by 10 Stories & Music: Big Talent in a Small Space is the only nonprofit monthly performance series in NYC featuring both storytellers AND musicians in an intimate space so people can really connect. It’s a place where talented, funny, inspired people tell stories and sing songs that make us laugh, touch our hearts — and bring us all just a little bit closer. I am the co-founder, producer and host.

2. Tell us about yourself as an artist.

I am a recovering journalist. Journalism is all about telling stories — true stories (I grew up in an era before “alternate facts”). I’ve told stories in every medium the law allows. I’ve worked in: Newspapers (The New York Times and The National Observer, a sister-paper to the Wall Street Journal); *Magazines* (Deputy Editor of Magazine Development at Hearst, Deputy Editor of Good Housekeeping, Deputy Editor and Associate Publisher of Working Mother); *Books: *I’m the author of the health book “Stop Killing Yourself: Make Stress Work for You” (Putnam’s) and ghostwriter of “Wonderful Marriage” (Ben Bella Books). I’ve worked *Online*, from small start-ups to big ones, helping launch several new channels for WebMD.com and consulting on the The Rockefeller Foundation’s re-launch of its entire site. Publications: My work has appeared in *The New York Times, Oprah.com, New York Magazine, WebMD.com, The Washington Post, The Miami Herald, The Chicago Tribune, The Detroit News, The Economist, Travel & Leisure, Redbook, Self, Good Housekeeping, Working Mother, USA Today, Reader’s Digest, The Washingtonian, Arthur Frommer’s Budget Travel, Family Circle, The National Observer. The Baltimore News American*. (If you have trouble sleeping, read clips here.

But as you may have noticed, many of those media outlets are dead or dying. I figured there had to be life after journalism. I was ready for a change. I got divorced, wrote and performed a one-woman show about Life, Love and Dating at several NYC venues. Then, a friend, who had been gathering people together to perform in a guy’s living room downtown periodically — a hodge-podge of poets and dancers and pianists — said she was tired of doing that and she asked me to take it over. The timing was perfect. I made a few changes — I changed the name to Out by 10: Music & Stories: Big Talent in a Small Space, honed the focus to storytelling and music (my two passions), searched for the best talent, changed the venue, launched a website, a Facebook page, twitter feeds (Instagram is coming), cultivated a mailing list. And boom — there we were. It turned out that nearly all the stuff I did in my career before was preparing me to create Out by 10, but I didn’t know it. Funny, isn’t it?

3. How do you select your story-tellers?

Schlepping is key to finding the best storytellers and musicians. I schlep to clubs, other storytelling and music venues — especially Moth events and Sofar Sounds, a great resource for musicians even if you do have to sit on the floor for two+ hours. Here’s what sets Out by 10 apart: I am not just looking for the best performers or the funniest, but those whose words and music go deeper to connect us — help us make sense of what it is to be human. I bring the artists and the audience together in an intimate space because I believe human connections happen best in a human-sized space. The performers don’t have to compete for the audience’s attention with clanking glasses and chatter typical in clubs; and the audience can focus deeply. Best of all, you get your culture fix fast — you’re *OUT* *by 10 PM* and home in time for a good night’s sleep.

4. How have you been able to encourage people to get involved in different ways?

Recently I added an Open Mic after the main show. I wanted people who are not necessarily pros, or pros who want to try out new material, and especially audience members who have been inspired by what they’ve seen, to have a chance to share their own stories in words and music. Also, for the second year now, a New York University storytelling/narrative class has come to Out by 10 to listen to the stories. This year we set up a Q&A after the show so the students and audience members could ask the storytellers they’d just seen all about the secrets of storytelling — what makes for a great story, how they got started, and what are the ins and outs of the storytelling business. To reach out beyond the people who can fit into our intimate space, we also have stated doing Facebook live broadcasts. Here’s a Facebook live broadcast of that Q&A discussion here.

Plus a snippet of last month’s show on Facebook Live.

5. As you are going into your third year, what lessons from previous seasons are you applying this year?

Our reputation is growing in the storytelling and music communities as a quality show. Performers love the nurturing experience and the smart, warm audiences. And audiences come back — we are selling out our shows. But we need to grow further to achieve our goals.

Next Steps: Social Media Expansion, Videos, a Podcast and Fundraising. We need to expand social media outreach and I need help to do it. HELP — is anyone listening? I need to set up an advisory board, to guide and brainstorm, and help us get to the next level. We have over a year’s worth of video and audio material from the shows. I hire videographers and a sound engineer to record the shows. But I haven’t had the budget to hire the producers we need edit the material, create a You Tube channel, and launch a Podcast Fundraising will be key. I pay our performers, many other venues do not. I’d like to pay them more, so artists can actually make a living doing what they love. I’d like one day to even pay myself. SO we need to look for ways to grow while still retaining the power of the intimacy. Sounds paradoxical, but with the right venue and approach, I know it is possible. And help…did I mention we need help? Volunteers, interns, people who want to be a part of a growing storytelling movement.

6. Tell us how you feel the outcome of the election will affect the stories being told?

OK first, I have to get this off my chest: If I *never* again hear the phrase, “Now more than ever”, describing what we need post-election, it will be too soon. Everyone trying to raise money or get you to join their club is saying that.

Whew. So I’d just like to say that “now more than ever,” we need what Out by 10 is doing: Changing the world one story at a time. I am always looking for storytellers with varied insights and lifestyles. In our Feb. 10th show, for example, in the midst of the recent Muslim travel ban, one of our performers is Negin Farsad, who not only was named both one of the *Funniest Women of 2015* by Huffington Post and is a TEDFellow, but she is director/producer of the feature film, *The Muslims Are Coming!* starring Jon Stewart and Lewis Black. She also sued New York State’s MTA over the right to put up funny posters about Muslims…and WON.

I don’t think the kinds of stories told will change dramatically, but I think the impact they have will grow. The growing popularity of storytelling — in the entertainment and corporate world (though they call telling their stories “Branding”) — is evidence of how important storytelling is to our future.

7. What do you hope is the impact of this work?

Here’s the impact I believe Out by 10 can have, is having. With each funny, moving, personal, true-life story that we hear, we are able to feel what it’s like to walk in someone else’s shoes. In this safe, intimate space, we can understand what makes us different (without feeling threatened), appreciate the things that make us the same. We can bridge the divide between us, tear down the walls around our hearts, and open ourselves up to the power we have when we join forces together.

Changing the world, one story at a time.

8. You utilize several of Fractured Atlas’s programs. How has it been working with Fractured Atlas? Are there particular ways your membership with us has been beneficial?

Fractured Atlas helped me receive some of the benefits of a “nonprofit” status with a fraction of the effort, cost, and time it would have taken me to do it on my own. Even the process of applying for fiscal sponsorship helped me crystallize my plans and overall goals. I expect that as I enter the next phase of raising funds from private individuals and foundations, they will offer even more invaluable guidance. They are an amazing resource for small but ambitious arts organizations like OB10.

9.Is there anything you want people who are being introduced to you to know?

Out by 10 has shows every 2nd Friday of the month in midtown at The John Strasberg Studios, 555 8th Avenue (between 37–38). The cover includes FREE wine. So come enjoy yourself. One more thing: Out by 10 is one of the few places that pays its performers. SO remember, donations are tax deductible. You’ll be not only supporting artists and the arts, but bringing us all closer to creating the kind of caring, compassionate world that is what really makes America great.

BONUS: In just two years, Out by 10 has managed to attract really big talent to its small stage:

Negin Farsad, named one of the Funniest Women of 2015 by Huffington Post, a TED Fellow and director of two films including* The Muslims Are Coming!* starring Jon Stewart.

James Braly, who had a hit Off-Broadway show. *Variety *called him “Gaspingly funny. Astounding. Fun”. “Like Spalding Gray, Braly has the gift.”-NY Post

Walter Parks, songwriter/guitarist, who toured for a decade with Woodstock legend *Richie Havens.

K J Denhert, who has played Sat. nights at the 55 BarJazz Club for 20 years and was named one of Jazz.com’s top female vocalists.

Deni Bonet, (who played the White House and Carnegie Hall) is a classically-trained, pop-rock-country violinist and songwriter who has performed at Out by 10 twice.

Lauren Lattimore is a Program Associate, Fiscal Sponsorship at Fractured Atlas, a nonprofit technology company that helps artists with the business aspects of their work. To learn more about Fractured Atlas, or to get involved, visit us here.